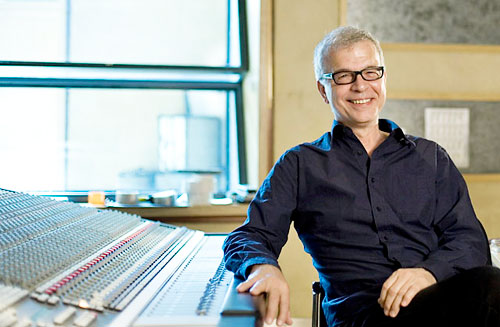 Some weeks ago you granted me to ask you some questions about your book, because I am going to write a review for the German online-magazine “MUSICIAN’S LIFE”. It would be great to have a personal interview and I have already sent you the questions, but now as the MIDEM is over, I had to change them a little. So if you have the time – please send me an answer.

> I recently listened to David Bowie’s album “The man who sold the
> world” which you have produced and played bass on. The first song
> “The With Of A Circle” is 8:10 minutes long and there are
> improvised instrumental parts. It’s not a 3-minutes single for the
> charts. Weren’t there any problems with the record company before
> it has been released?

Honestly, the record company hardly cared about what we were doing in
the studio. TMWSTW was received very unenthusiastically. They just
accepted it and did very little to promote it. But the early 70s was
all about experimentation, so we were recording music we thought was
both ground-breaking and contemporary.

> In the 70ies I played in a band – the kind of music they call
> “Krautrock” today. The music was released on the label “Brain”
> which was part of a bigger company. The company paid for the studio
> sessions, five days for recording an album and one for mixing. They
> didn’t promote the records very well except for advertising in a
> music magazine. Have the British bands been in a better situation
> in those days?

I would say that British record companies were a bit more generous
than that. We were given a five to six week budget to make TMWSTW.
That was during a period when the whole world looked to Great Britain
for the ‘next big thing.’ British labels were making big money hand-
over-fist back then.

> Is it true that British musicians sometimes listened to the records
> by Kraftwerk, Tangerine Dream, Neu, Can and other German bands and
> that they found their music interesting?

David Bowie was among the first British musicians who listened to
German music. The bands you have mentioned had a great influence on
many British groups in the late 70s and early 80s. Connie Plank was
a god to some of us.

> In the beginning of your career you recorded on 4-track tape
> machines. Today some productions use 100 and more virtual Pro Tools
> tracks. Does that make music better?

No. Only talented musicians make music better. DAW recording has
spawned a generation of mediocre musicians who spend far too many
hours editing their performances. I always say, “Every hour you
spend on a computer is an hour not practicing your instrument.“

> Today computers and software make it easier and much cheaper than
> ever to produce music. Is it possible to make a professional
> sounding mix inside the computer or are outboard mixing consoles
> still needed for a good production?

Digital recording has entered a very healthy period. In the hands of
an expert it is almost impossible to tell whether something was mixed
on a traditional console or ‘in the box,’ as they call mixing
entirely in a computer. I like to combine the both worlds when
possible. The sound of analog has more to do with the equipment used
than the tape itself.

> I’m a great fan of surround sound and I would be very disappointed
> if 5.1 audio without film would disappear like quadraphonics did. I
> bought “Heathen” and “Reality” a second time after the SACDs were
> released and they’re worth every cent. The fantastic “Stage”-album
> is on DVD-Audio. What is the reason for changing the format and do
> you believe that one of these formats has got a future?

They were for different companies. Sony paid for Heathen and Reality
5.1 mixes and were pushing their own format, SACD. DTS paid for
Stage and David Live to push their format, although they allowed it
to come out in DVD-A too. The format wars are the death of 5.1. I
love the sound of 5.1. I have a decent system at home and listen a
lot. I have a Denon player than can play all formats, but it was
quite expensive. The average music lover doesn’t have a lot of
disposable income for such a machine. Of course I watch movies on
DVD and almost all have a surround sound mix. It’s worth having the
set up for music and video. In the 70s Quadraphonic sound died
because it was only an audio format.

> CD against music downloads. People can buy the songs of an album
> separately – will this be the end of the album as we know it?

It already has taken place. Hardly any kids listen to albums
anymore. I read an article a couple of years ago in the New York
Times that said younger people are more loyal to a song and less
loyal to an artist. Once record labels figured this out they became
singles orientated again. It’s a bad time for albums. But I think
online sales sites like iTunes are a good thing. You have the choice
of downloading only the songs you like or the entire album at a big
discount. At least people are buying music again! I use iTunes all
the time.

> On 29 January you and Laurence Bell of Domino Records have
> presented the “talent only” event at the Midem in Cannes. Can you
> say something about that?

I didn’t attend Midem this year. I had to cancel because I was far
too busy in the studio. Since December I have been working in the
studio with Alejandro Escovedo, Raphael (of France) and Kristeen
Young on their new albums.

> Back to your book. The last lines are “We could be heroes.” David
> Bowie. I always considered “Heroes” a very special song, the kind
> everyone can make his own story to. Besides the tale about the
> Berlin Wall. The lyrics seem to tell me that everyone has a lot of
> power inside he might not even be aware of and sometimes we can
> defeat our fears. Then we can be heroes just for one day. – What
> d’you say?

Well, to me the song’s message is very clear: “We can be heroes.” It
talks about potential, but how many of us really aspire to be
heroes? I think the subject of a song was a man who felt he could be
a hero every time he got drunk. But it’s a great song, a truly great
song!

Iconic One Theme | Powered by Wordpress